How do I get the names for my paintings… and the story behind it.

So yesterday I posted a snippet from a song I really can connect with. If you missed it, it was titled “Better Together” by Jack Johnson. Here is the song, if you’d like to listen to it.

I had just recently finished this painting and was waiting for a title to come to me. When I heard the song, I knew it was the perfect name for the piece. I can only imagine the difficulties and struggles living as a child on the big open prairies could offer.

Having explored the big open prairies along some of the old forts still in existence, the prairie is vast, and not much to see. One of the fort guides explained that the only thing you could see as you made your way West was the garrison flag. You could see it for 2 days out.

If you stop and think about that little tidbit … the only thing you could see out on the prairie was the garrison US Flag for 2 days… along with the wind-swept prairies, and any animals that might have dotted the horizon.

In today’s world, we see tons of buildings and planes and cars and endless other sites. To only see a flag for 2 days as you traveled West. The possibilities and promises of a better life would be endless.

I find the story behind each painting is usually what jump starts my painting. 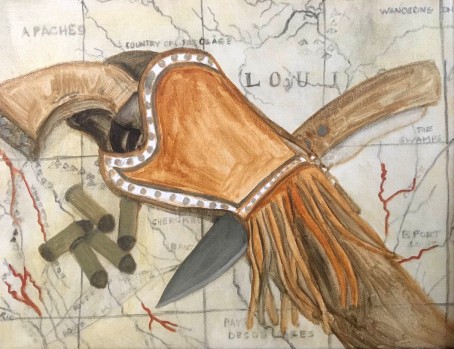 For instance, my newest painting – untitled and still  a work-in-progress on the easel – started from performing some historical research on mountain men.

In this painting, the map in the background is from an 1820 map of Louisiana, with markings of Native American dwellings, mountains and rivers, along with known trails and forts. The rivers have been marked in red where this particular mountain man has laid his traps and found success.

I am fascinated with history and how that impacted us today…

A mountain man required him to be very mobile, and have his necessary tools with him at all times. His tools included his rifle, his tomahawk, and his possibles bag. A possibles bag carried the mountain man’s necessities, such as knife and flint. He was free to travel long distances with the help of the horse. The pack horse carried supplies and beaver pelts. Wild meat was often their only source of food.

Mostly, living the life of a mountain man was a lonely existence. Some Native American tribes, such as the Blackfeet, saw the mountain men as a threat to their way of life. Mountain men did make friends with many other American Indian tribes. Mountain men also were able to connect with others during summer rendezvous, where they were able to trade and sell their pelts.

After 1840, the beaver population drastically declined and the demand for beaver pelts decreased. This resulted in a change of lifestyle for many mountain men, who became guides or scouts for the traveling wagon trains heading to the West. The mountain man was the perfect candidate to lead the wagon trains to the best route to Oregon and California, because they had already explored its unknown territory and learned to survive in its hostile environment.

In my opinion, without the mountain man and his earlier explorations, settling the West would have been vastly different and much more challenging.

Sometimes there are wonderful stories behind a drawing, and this was one of those drawings.

Early this spring, 2014, we had the most amazing hummingbird grace our backyard. Our backyard is blessed (and cursed) with amazingly beautiful trumpet flowers. They range in color from yellow to red and all of the colors in between.

While I’m accustomed to see the hummingbirds with the green backs, this one hummingbird kept appearing and was quite different in appearance. Only after discussing this with an avid hummingbird aficionado did I realize that we were looking at a Native Texan.

Below is the difference…

As a graphite pencil artist, there is nothing exciting about black Angus cattle. So to make it look like something more than just a black blob is quite difficult.

I think I succeeded in bringing character and life to this little guy.

Defining the West
Create a free website or blog at WordPress.com.